New Series of Videos on the Roots of American Political Thought 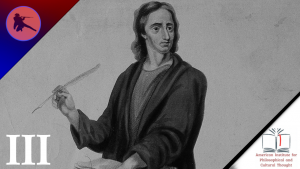 The AIPCT is pleased to announce a new series of short historical videos that trace the roots of American political thought to its roots in the Old World, and through its development in the new. The series is done in conjunction with The Founders Club and Christian Murray, who is working with AIPCT to produce these videos. These will be featured in our Education tab on this website. The full playlist is here, on our YouTube channel. Completed videos so far include three on the thought of John Locke and one on the thought of Baron de Montesquieu. Planned videos include William Pitt the Elder, Thomas Paine, and others. Be sure to subscribe to AIPCT when you visit.