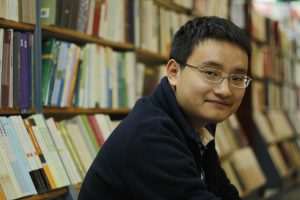 The AIPCT is pleased to announce a seminar, free and open to the public: “‘We Are Witnessing the Birth of a Nation’: John Dewey and Benedict Anderson” Liu Xing, Thursday, January 16, 2020, 7:00 PM. The seminar may be watched here.

Liu Xing is Lecturer at Beijing Normal University, in the History and Philosophy of Education. His Doctoral studies were at Hiroshima University in Japan and he specializes in Sino-Japanese educational thought. His particular interest in John Dewey’s influence on the educational thought of both countries brings him to Carbondale for research. Dewey traveled through Japan and China during a time time of great transition, 1919-1920, and left a permanent mark on the thought of each country. He is the translator of Dewey’s Letters from China and Japan.

Benedict Anderson’s Imagined Communities (1983) is an important work which argued that nation is never a solid entity, but something that is imagined and shaped. “We are witnessing the birth of a nation,” is from a letter Dewey wrote to his daughter during his Chinese visit. Dewey had already realized that China was a community, or a nation, being constructed and imagined, when he visited. He wanted to observe it and this is an important reason why he delayed his return to America. Benedict Anderson’s idea, which is almost 70 years later, shares much in common with Dewey’s observations.

AIPCT is a not for profit private foundation promoting research and education in cultural and philosophical thought related to the American intellectual traditions. The doors open at 6:30. No reservation is required and admission is free and open to the public. Attendees are welcome to bring their own drinks and snacks, and light refreshments, beer, wine, and soft drinks are provided. For more information, call 618-565-1238.