The AIPCT is pleased to announce the Residency Lecture of Megan Volpert, “Normativity in the Nineties: Notes Toward Future Applications of Pierre Schlag’s Critique,” which will be held on-line (due to COVID) on Saturday, July 16, 2022, at 11 AM US Central Time. (This is 6 PM in Central Europe.)

Abstract: This lecture aims to do three things in order to create the conditions for a resurgence of interest in the Critique of Normativity developed by law professor Pierre Schlag throughout the 1990s. One, it will describe the original critique through a survey of Schlag’s literature. Two, it will suggest avenues for a genealogy tracing the influence of this critique from its debut to the present day. Three, it will offer contemporary and future possibilities for the ongoing application of the critique. 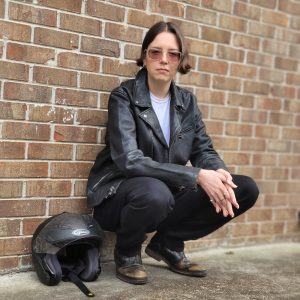 Megan Volpert is a frequent contributor to PopMatters and an Assistant Professor of Interdisciplinary Studies at Kennesaw State University, where she specializes in Gender and Americana. She earned an MFA from Louisiana State University and has written or edited over dozen books on popular culture, including Perfume: Object Lessons (Bloomsbury Academic, 2022), Closet Cases: Queers on What We Wear (Et Alia, 2020), and Boss Broad (Sibling Rivalry, 2019). Her awards include Georgia Author of the Year, Teacher of the Year, two Lambda Literary finalists and an American Library Association honoree. Volpert’s philosophical pursuits as a cultural critic run the gamut from high to low in music, television and fashion, usually emphasizing her queerness at some intersection with existentialism, psychoanalysis, or performativity. She will be in residence at AIPCT in July of 2022, presenting one of the Hahn Lectures and a Residency Lecture.