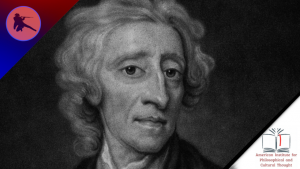 The video is here. This is the second video in our series, this one on Locke’s First Treatise of Government. The AIPCT in cooperation with The Founders Club does a series of short videos about the roots of American political thought. This is the first of three videos about John Locke’s political theory, explaining why he opposes absolute monarchy and “the divine right of kings.” The framers drew upon these arguments to make their case in the Declaration of Independence. Christian Murray is the filmmaker and writer, researching his work in coordination with AIPCT.